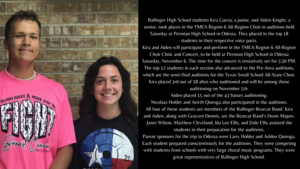 Ballinger High School students Kira Garcia, a junior, and Aiden Knight, a senior, took places in the TMEA Region 6 All-Region Choir in auditions held Saturday at Permian High School in Odessa. They placed in the top 18 students in their respective voice parts.

Kira and Aiden will participate and perform in the TMEA Region 6 All-Region Choir Clinic and Concert, to be held at Permian High School in Odessa Saturday, November 6. The time for the concert is tentatively set for 5:30 PM.

The top 12 students in each section also advanced to the Pre-Area auditions, which are the semi-final auditions for the Texas Small School All-State Choir. Kira placed 3rd out of 38 altos who auditioned and will be among those auditioning on November 5th.

Aiden placed 15 out of the 43 basses auditioning.

Nicolaas Holder and Aeirth Quiroga also participated in the auditions.

All four of these students are members of the Ballinger Bearcat Band. Kira and Aiden, along with Graycen Dennis, are the Bearcat Band’s Drum Majors.

Janet Wilson, Matthew Cleveland, Ida Lee Ellis, and Dale Ellis assisted the students in their preparation for the auditions.

Parent sponsors for the trip to Odessa were Larry Holder and Ashlee Quiroga.

Each student prepared conscientiously for the auditions. They were competing with students from schools with very large choral music programs. They were great representatives of Ballinger High School.