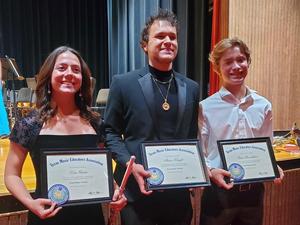 Ballinger High School Band Directors Janet Wilson, Matthew Cleveland and Choral Director Dale Ellis concurred in the nomination of these students for this honor. The award is given to students who have exhibited outstanding qualities in scholastic merit, musicianship and citizenship in their school and community.

They are all wholehearted participants in both band and choir and actually qualified for this award through both organizations. Some of their major achievements this year are as follows:

Each of these maintained an A academic average and academic eligibility throughout the year.

This is Kira’s second year to qualify as a Texas Music Scholar.

Kira and Aiden served as Drum Majors for the Ballinger Bearcat Band for the 2021-2022 school year, along with Graycen Dennis.

The Texas Music Educators Association, headquartered in Austin, Texas, is sponsor of the Texas All-State Bands, Orchestras, and Choirs, and is an association of over 13,000 music teachers whose goals are to support music education in Texas, provide professional growth opportunities for educators, foster public support for music in schools, and offer quality musical experiences for students.